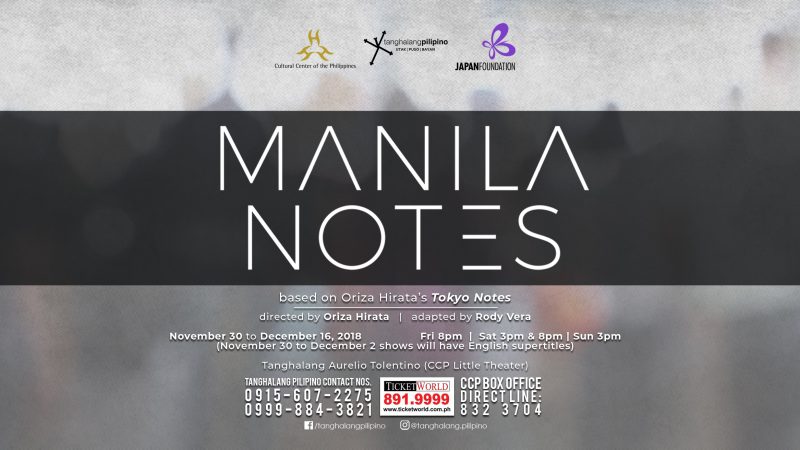 The Japan Foundation, Manila and Tanghalang Pilipino, in cooperation with Cultural Center of the Philippines, present Manila Notes, a Philippine-Japan theater collaboration. This play is the adaptation of Tokyo Notes, written by internationally acclaimed Japanese playwright and director Oriza Hirata.

Tokyo Notes has been translated into 13 languages for productions in many cities around the world, including at Festival d’Avignon in France. One of the most critically acclaimed works of Hirata, the play has also created artistic collaborations and cultural exchange through adaptations such as  Seoul Notes (2004), Taipei Notes, and Bangkok Notes (2017).

In Manila Notes, the renowned playwright Rody Vera and 20 leading Filipino actors have been involved in the process of the Filipino adaptation, through meaningful discussions, workshops and rehearsals.

The set design is also a collaboration by Japanese set designer Itaru Sugiyama and select theater practitioners and students in the Philippines.

According to Hirata, “We need to create plays or works that compliment audiences’ intelligence or their knowledge and have them think. Through Manila Notes, I would like to work together with Filipinos in the theater industry and create a brand new type of theater practice.”

An internationally acclaimed playwright and director, Oriza Hirata is among the most distinguished in the contemporary theater scene in Japan. While in college, he founded Seinendan Theater Company to pursue and practice his “contemporary colloquial theater theory” that brought debates about theatrical realism and the representation of everyday life in Japan into focus. This new and practical method has had a constant impact on the theater world since 1990s. He is recognized for groundbreaking collaborations with artists in France, Korea, China, Germany, Thailand, resulting in acclaimed productions of “Songs of Farewell”, “Across the River in May”, “Lost Village”, “Three Sisters (Android version)”, “Stilles Meer”, “Tokyo Notes”, among others. He is also active in education and teaching at many universities, developing comprehensive theater education programs.

“The effect of the Japanese playwright Oriza Hirata’s dialogue can be as transfixing as a glimpse of human tissue under a microscope.” (Pamela Renner, The New York Times)

“On the surface, he seems to eliminate everything that is theatrical. However, a closer look would reveal that Hirata grasps the vital points of theater, namely ‘to vigorously present the state of the world’ and ‘to precisely and exquisitely present the state of people’s minds.” (Hisashi Inoue, ‘Comments Upon Selection of the 39th Kishida Kunio Drama Award’, February 1995)

The play takes place at the lobby of an art museum in the near future in Manila. A major war is being waged in Europe and many paintings, including those by Vermeer, have been moved here for their protection. Filipino family members, friends and lovers visiting the museum continue their fragmentary conversation on how to take care of their ageing parents, future careers, love, inheritance and whatnot. The play portrays how the people of Manila lead their ordinary everyday lives, reveal a whole range of problems and crises of our modern society.

For updates and inquiries, please follow facebook.com/jfmanila or email manilanotesph@gmail.com.
Follow the official event page at https://bit.ly/2RooDWe
Please use the hashtag #manilanotes