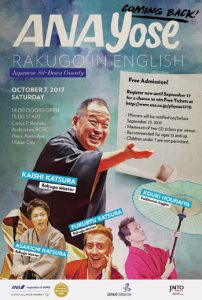 Rakugo is a Japanese comic storytelling art that has been used as entertainment for over 400 years and is still widely popular today, staged at “yose”, which are specialized theatres for Rakugo. The artist speaks to the imagination, and single-handedly creates the hilarious side of tradition of Japan.

Get a chance to win free tickets to this one-of-a-kind Japanese comedy show: Register now at http://ana.co.jp/phyose1710.

Registration is open until September 17, 2017.  Ticket winners will win on a lottery basis, with maximum of two (2) tickets per winner and will be notified through e-mail on or before September 23, 2017.

The show is recommended for ages 13 years old and up. Children under 7 are not permitted in the theater. For more information, please visit the Japan Foundation, Manila website:  https://jfmo.org.ph or http://facebook.com/jfmanila

About the Japan Foundation

The Japan Foundation was established in 1972 by special legislation in the Japanese Diet and became an Independent Administrative Institution in October 2003. The mission of the Japan Foundation is to promote international cultural exchange and mutual understanding between Japan and other countries. As the18th overseas office, the Japan Foundation, Manila was founded in 1996, active in three focused areas: Arts and Culture; Japanese Studies and Intellectual Exchange; Japanese-Language Education Overseas. For more information please visit our website at www.jfmo.org.