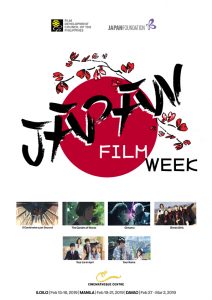 In celebration of the Philippine National Arts Month in February, The Japan Foundation Manila, in partnership with the Film Development Council of the Philippines (FDCP) and NIHONGO Partners’ SPFL-CJH schools will have a Japanese Film Week–offering a series of Japanese film screenings in several regions targeting students and film goers as well as the general public who rarely have access to Japanese films. Admission is free on a first-come, first-served basis.

Japan Film Week officially kicks off with screenings of MUMON: The Land of Stealth (Japanese title: 忍びの国) at FDCP Cinematheque Centre in Iloilo City on February 13 at 6:30pm. It is a Japanese jidaigeki film, directed by Yoshihiro Nakamura and based on the novel by Ryō Wada. Set during the Sengoku period, the film focuses on fictional events that take place surrounding the Tenshō Iga War. Completing the line-up are six more films with English subtitles offering viewers the chance to experience their favorite genre while discovering something new:

Catch below screenings to be held at the following venues nationwide:

*We have special screenings for students of the following schools/universities: