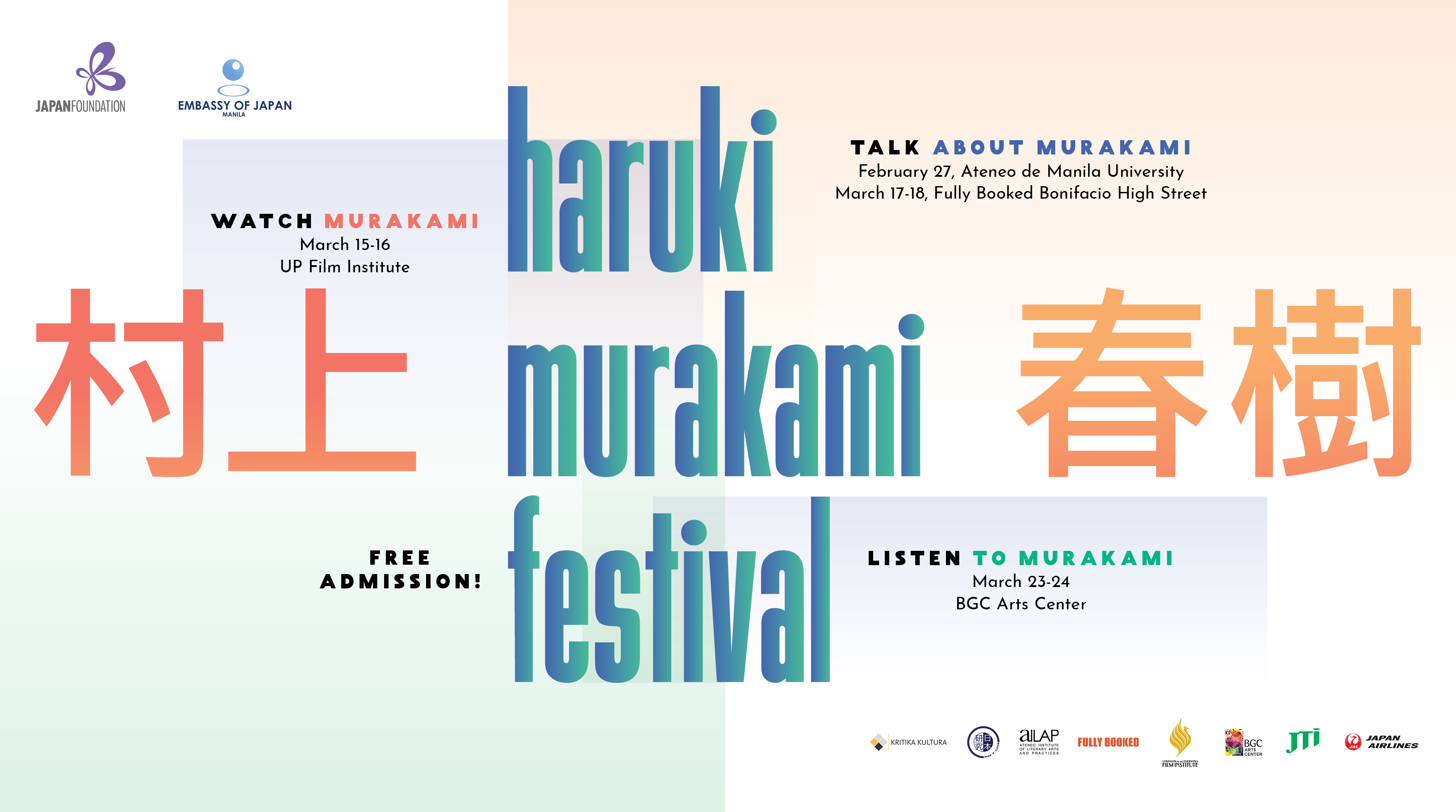 Haruki Murakami Festival in Manila — Experience his Works through Music, Films and Talks

“Watch” Murakami Filmshowings at The UP Film Institute, University of the Philippines Diliman

Experience the Works of Best-Selling and Renowned Novelist Haruki Murakami

through Music, Films and Talks at the Haruki Murakami Festival in Manila

MANILA and TOKYO (February 13, 2018) The Japan Foundation, Manila is pleased to present the first ever Haruki Murakami Festival in Manila — Experience his Works through Music, Films and Talks from February to March 2018. The Festival, which showcases one of the world’s best-selling and most popular Japanese contemporary novelists, Haruki Murakami, consists of a series of free events categorized in three segments where you will have opportunities to enjoy the world of Murakami with your senses: 1) “Talk about” Murakami: talks, 2) “Watch” Murakami: films; and 3) “Listen to” Murakami: live concerts.

Three talk sessions are set to capture hardcore fans of Murakami, also known as “Harukists” to first-time readers or even the most reluctant of readers. Kicking-off the Festival, Ateneo de Manila University (ADMU) English professor Alona Guevarra — whose areas of specialization include Haruki Murakami Studies — will lead the introductory talk for the festival together with instructor Julz Riddle. They will discuss the popularity and global appeal of Murakami on February 27 at Leon Hall, ADMU, followed by an overview and sneak preview of other elements of the festival, including a piano performance by award-winning pianist April Dawnena Merced-Misa, who will take part in the “Listen to” Murakami segment.

Two other talks will be held in partnership with Fully Booked on March 17 and 18 at Fully Booked, Bonifacio High Street Branch. On March 17th, award-winning Filipino writers will talk about Murakami’s story, writing style, and social influence.  On March 18th, two Filipino writers and running enthusiasts will talk about Murakami’s work and his dedication to running, as inspired by Murakami’s memoir “What I Talk About When I Talk About Running”.

Two award-winning film adaptations of Murakami’s works: Norwegian Wood and Tony Takitani will be screened at the UP Film Institute, University of the Philippines Diliman on March 15 and 16 as part of the festival to watch and experience the film interpretation of the Murakami world.

Norwegian Wood (directed by Tran Anh Hung, 2010) is one of Murakami’s most well-known international best-selling novels which was published in 1987 in Japan. It shows a sensitive portrayal of the inner anguish of a young man who is torn between two completely different women. Tony Takitani (directed by Jun Ichikawa, 2005), based on a Murakami’s short elegant story starring Issey Ogata and Rie Miyazawa, tells the story of a lonely man who finds love.

Murakami’s passion for music is intense. It is well-known that Murakami used to run a small jazz bar for several years, and he weaves in various musical references in his novels. The Japan Foundation, Manila will bring two-night live concerts that feature music woven in Murakami’s novels on March 23 and 24 at BGC Arts Center. Curated by professor Junichi Konuma who specializes on music culture, the concert intertwines the spoken word read by David Ezra with different genres of music played by jazz pianists Hiroko Kokubo and her trio, and the Beatles-inspired classical ensemble, 1966 Quartet, in special collaboration with pianist April Dawnena Merced-Misa.

Haruki Murakami’s bio is available at http://www.harukimurakami.com/author/ (Penguin Random House). Please note that the presence of Haruki Murakami himself is not expected during the Festival.

For more details and updates about the Festival, please visit the following: