Annaka feudal lord Katsuakira Itakura (Hiroki Hasegawa) holds a run across mountain roads to get his samurai warriors into shape. However, the Bakufu central government views it as a rebellion and dispatches assassins to the castle. Meanwhile, Annaka domain accountant Jinnai Karasawa (Takeru Satoh) senses that something is amiss with the Bakufu. Japan’s renowned actor Takeru Satoh gives a subtle and stirring performance as the lead actor, providing action-filled, energetic experience for audiences. 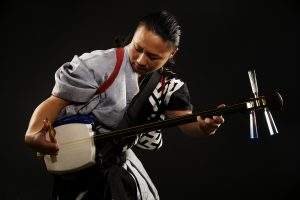 Bringing additional excitement to the opening week of this year’s JFF | EIGASAI is a special performance by Shamisen Player Keisho Ohno. Ohno is a master of Shamisen, a three-stringed Japanese traditional music instrument, accredited at only twelve years old, and two years later became the first “authorized successor of authentic Chikuzan-bushi” shamisen player. He has toured worldwide in US, Europe, Africa, and Brazil, including a performance at the Organization for Economic Cooperation and Development (OECD) conference, as well as at the Japan Expo 2018 in Paris, France.

One of his original music compositions named “Samurai” are used as a theme song for the New Year Ekiden or marathon relay race held and broadcasted nationwide on the New Year in Japan.

Equally exciting films in the JFF | EIGASAI line-up includes: 1) The 8-Year Engagement by Takahisa Zeze; 2) KAKEGURUI by Tsutomu Hanabusa; 3) The Crime that Bind by Katsuo Fukuzawa; 4) Laughing Under the Clouds by Katsuyuki Motohiro; 5) Mixed Doubles by Junichi Ishikawa; 6) One Cut of the Dead by Shinichiro Ueda; 7) Perfect World by Kenji Shibayama; 8) Yakiniku Dragon by Chong Wishing; 9) The Tears of Malumpati by Keita Meguro; 10) Lu Over the Wall, an animated film by Masaaki Yuasa; 11) Mirai, an animated film by Mamoru Hosoda; 12) The House Where the Mermaid Sleeps by Yukihiko Tsutsumi; and 13) special screenings of award-winning Japanese film director Hirokazu Kore-eda’s  feature films, including After the Storm, The Third Murder and the winner of the Palme d’Or at the 2018 Cannes Film Festival and nominee for the 91st Academy Award for Best Foreign Language Film, Shoplifters.

Together with the Cultural Center of the Philippines (CCP), the Japan Foundation’s continued support towards independent filmmakers brings another Japanese independent film to Manila: Lying to Mom, winner of the Best Film Award at the 31st Tokyo International Film Festival’s Independent Japanese Cinema category. The film is a drama mixed with humor depicting a family attempting to recover from sorrow. Katsumi Nojiri, who worked as an assistant director on The Great Passage and The Lies She Loved, among others, makes his directorial debut with his own original script.

Director Katsumi Nojiri will be present at the Philippine premiere of Lying to Mom on August 3 at CCP during the Cinemalaya Philippine Independent Film Festival, an allied festival of EIGASAI since 2016.

The JFF | EIGASAI is open to the public, and is free of charge, with the exception of films to be screened at Shangri-La Plaza Cinema (July 3-14) which will be Php100 per screening. For detailed screening schedules and inquiries, please access the Japan Foundation, Manila website: www.jfmo.org.ph or call at (+632) 811-6155 to 58.